We didn’t hang around during our trip to Iceland. When we landed in the afternoon at Keflavik airport, passed through security, collected our luggage and collected our rental car, the easiest option would have been to drive straight to our hotel, but we instead opted for an immediate immersion in the country with a visit to the Grindavak volcano.

One of the beauties of visiting Iceland during the summer months is that the days are long – very long – and there are so many experiences to be had. In July, the sun rises around 3am and doesn’t set until midnight – that’s 21 hours of daylight to play with! And so, instead of driving straight to our hotel after picking up our luggage at the airport, we instead headed to the small fishing town of Gindavik, just south of the Blue Lagoon, to meet Haffi, a knowledgeable local guide. for 2Go Travel in Iceland. This was so we could explore the Fagradalsfjall volcano site. And from Gindavik it’s an even shorter drive along Highway 427 to a small parking lot where our hike began. 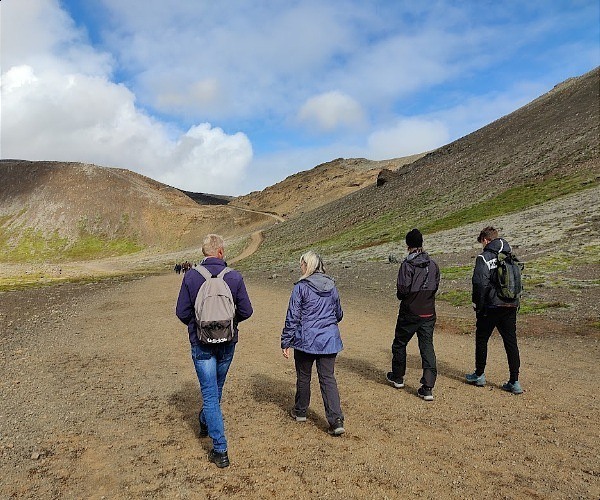 This is a completely private experience that you can have as a family. Although dormant at the time of our visit, a similar tour by 2Go Iceland Travel was featured on the BBC Travel Show when one of Iceland’s hottest new attractions burst onto the scene – literally – and the volcano was still active.

Located in the Geldingadalir Valley on the southern Reykjanes Peninsula, about 40 kilometers from Reykjavik, Fagradalsfjall – although active for about a million years – lay dormant for 6,000 years, until the last year when it erupted from March 19 to September 18, 2021, making it Iceland’s longest eruption in over 50 years. 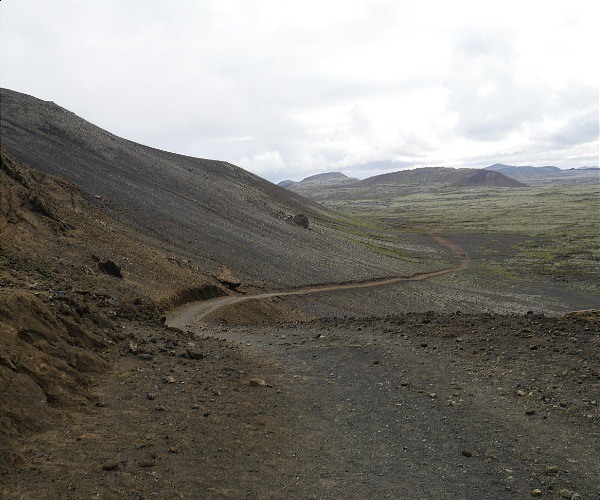 Haffi, a Manchester United fan, told us he was watching a football match at his home in Grindavik on the evening of March 19, 2021 when his partner called him and said “There’s a volcano outside the window of the kitchen”.

He got up to take a look, and while they couldn’t see the eruption from the window, of course, the sky was completely orange. Haffi said the site of the eruption would have been a huge relief for many Icelanders. It was originally thought that an eruption could occur 20 kilometers northeast of where it occurred, which would have brought it closer to civilization, but fissures may open n’ anywhere and this site was much safer from a human point of view. Curiously, only two hours earlier, geologists at this site had concluded that an eruption was not imminent.

As we approached the lava fields of the eruption, Haffi told us that this would have been a site rarely visited by people – maybe just a few locals. There was no parking and no walking trails, but relatively easy access from Reykjavik, which created a problem with chaos on the roads, and people walking but not following pre-set routes. The road was closed and visitors had to walk from the Blue Lagoon or another side, but either way it was about a 10 kilometer walk each way. 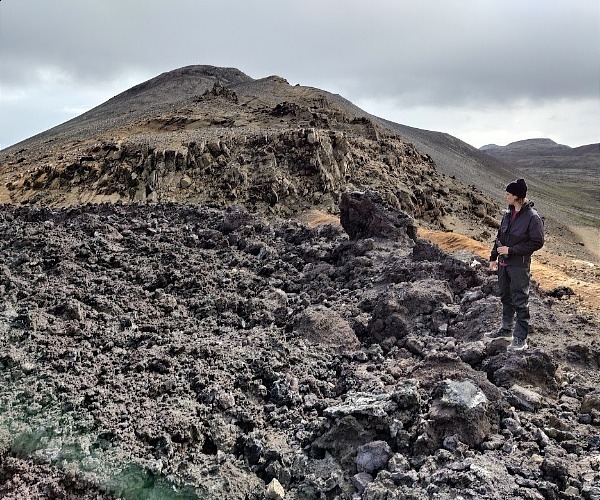 This forced people to be picked up as they were exhausted along the way, or they got lost in the lava fields, creating a new problem for the rangers. They either had to close the area completely or make it more accessible – and luckily for anyone who wanted to see this amazing phenomenon and scenery, they opted for the latter. 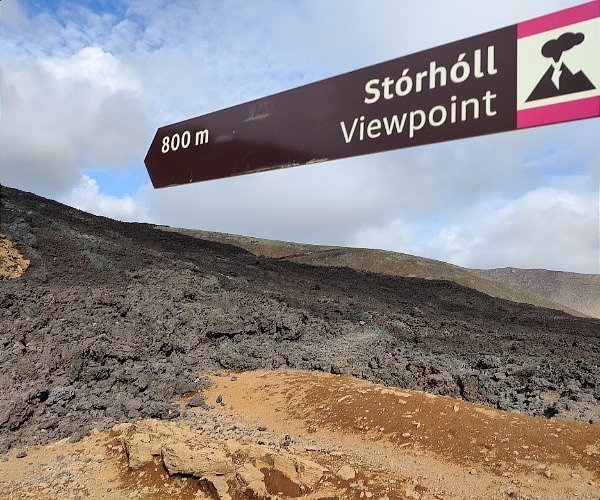 While a living volcano is undoubtedly an incredible sight, so is the landscape it leaves behind, and as we climbed higher we were able to marvel at the expanse of fields of lava from the eruption. By April 2021 a 300 meter fissure had developed and after 6 months the lava flows covered several square kilometres. 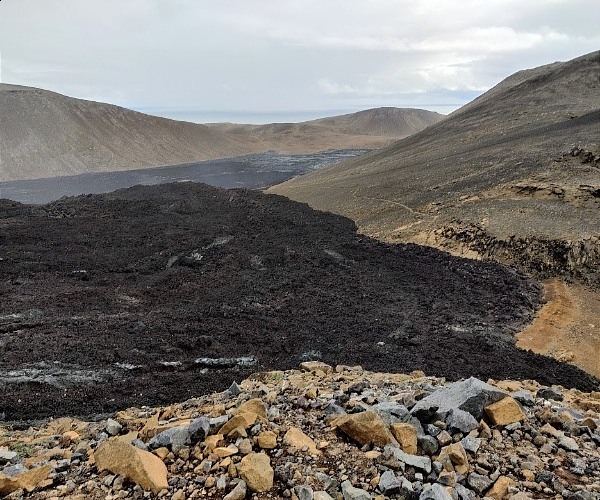 Incidentally, landowners cannot prevent people from visiting the site as there is a ‘right to roam’ policy in Iceland, unless it is fenced off from public access. So in this case it was the landowners who created the paths and the parking lot. They get their income from parking – they can’t charge an admission fee, so that’s really the only way to get something back from the unusual situation they’re in. 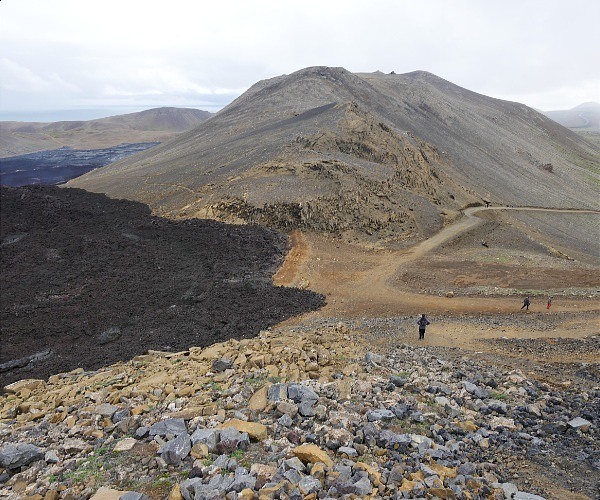 Having climbed even further, we deviated from the path to cross part of the lava field in order to be a little closer to the crater. Unbeknownst to us, Haffi had a little surprise for us, thanks to a discovery he made a few days earlier – something that, to his knowledge, no one else knew about. 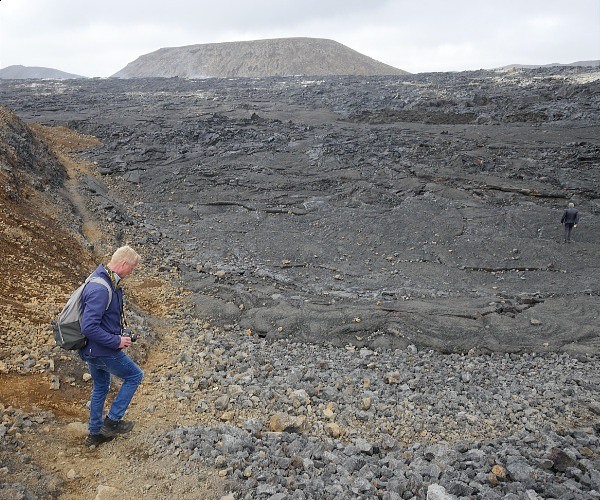 Although you can explore the volcano on your own, I highly recommend taking a guided tour to get the most out of your experience. Not only will you get a more personalized overview of the area, but an expert who frequents the volcano will be able to quickly assess your group’s abilities and know the best routes to take you. 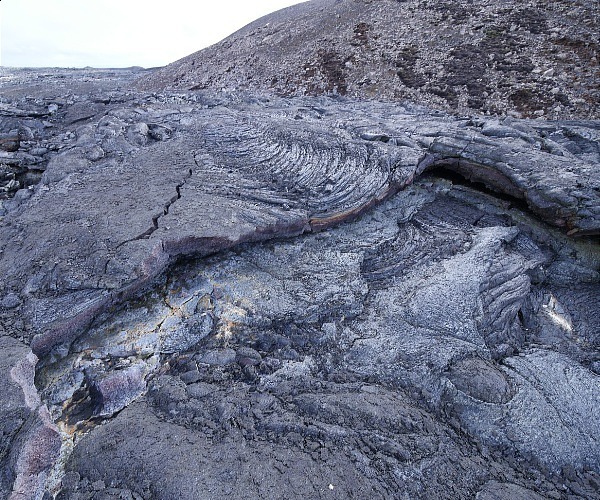 There were no injuries in the eruption itself, but hikers often broke their legs and arms (and continue to do so!). As we went through the somewhat fragile lava, which sometimes crumbled underfoot, you could see how this could happen. 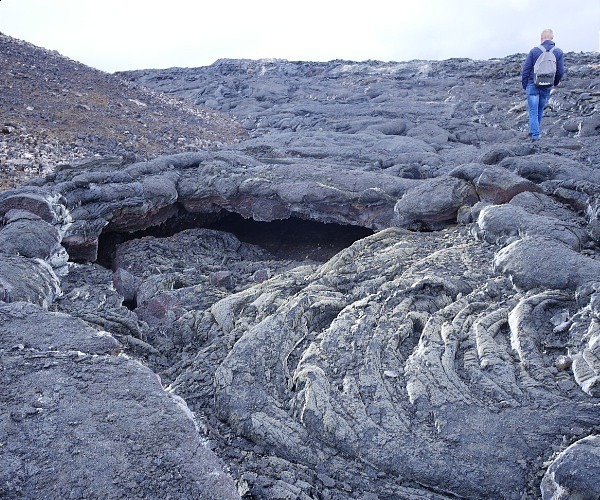 The lava was surprisingly brittle and light. As the lava was flowing rapidly, there would have been rapid heat loss at the time of the eruption, which can increase viscosity and cause differential flows, explaining the variety of formations we saw before us. 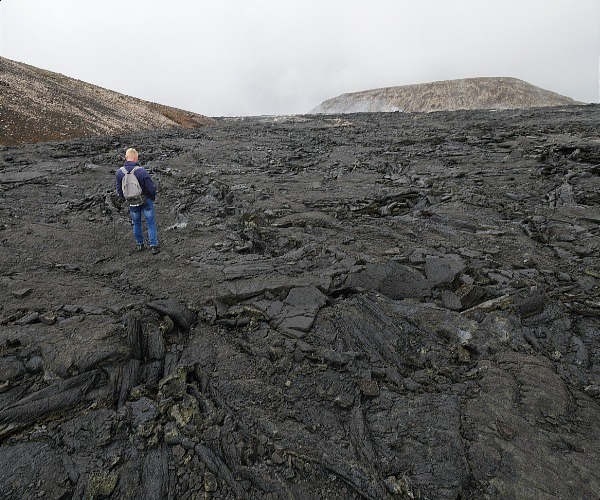 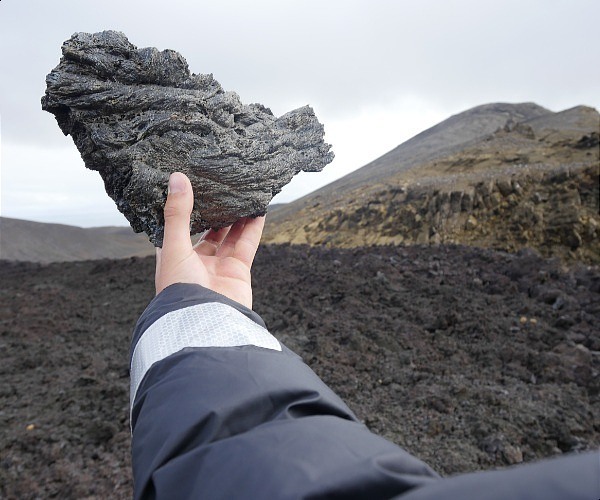 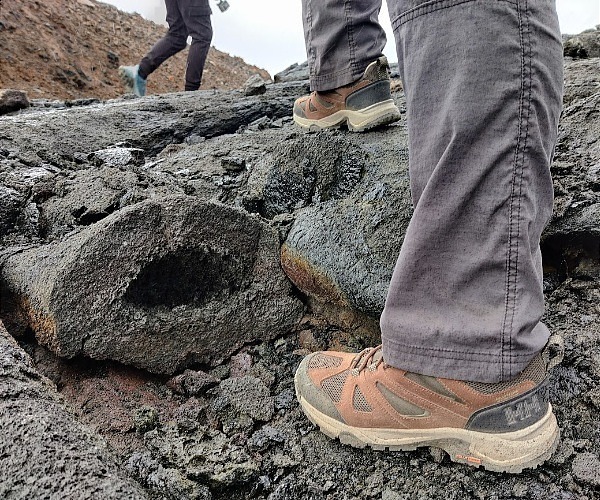 As we got closer to the crater, we also saw more evidence of sulfur deposits (sulphur being a common chemical element found in the earth’s crust), as well as signs of heat still emanating from the earth through locations. 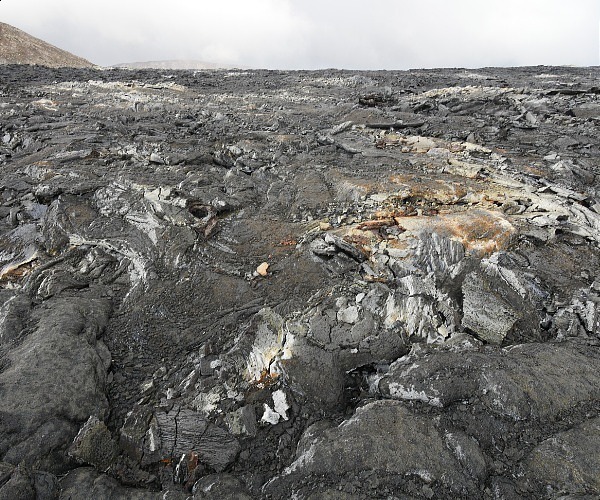 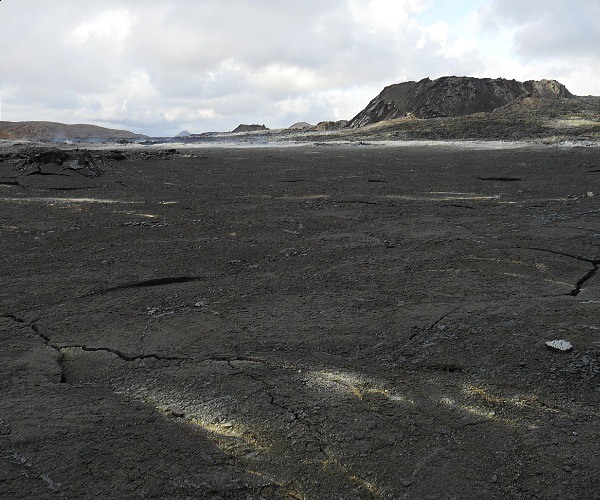 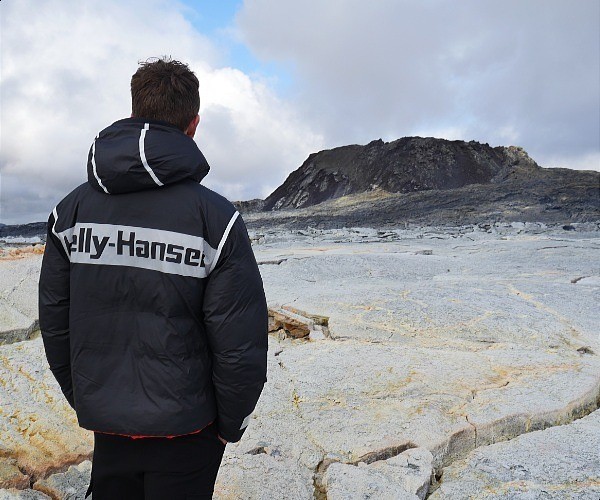 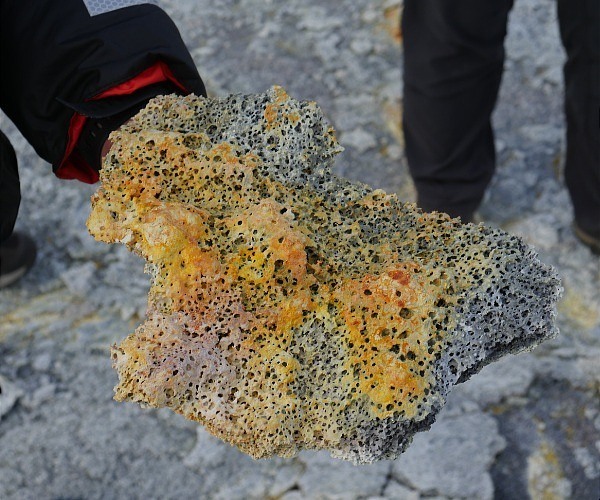 But then came the surprise… at one particular sulphurous-looking spot, Haffi told us to step back for a moment while he went to check on the discovery he had made a few days earlier. 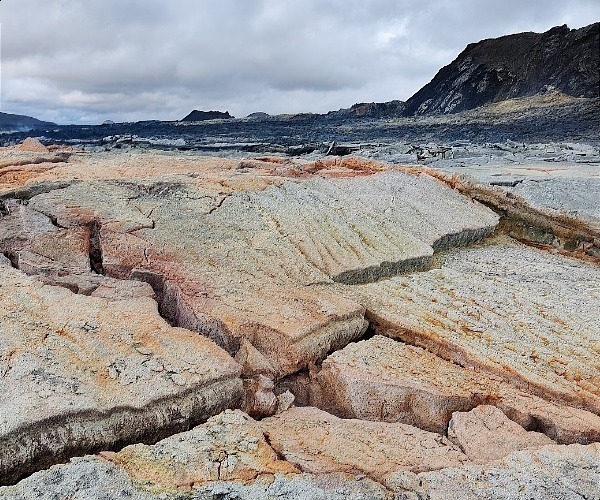 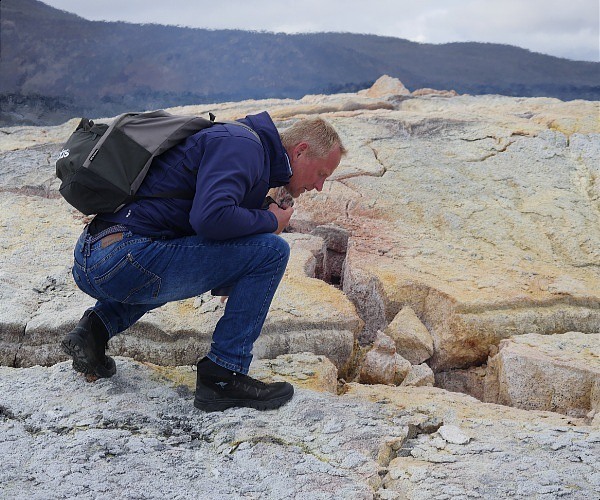 He came back, explaining to us that – if you had the right angle – it was possible to see lava in the cracks below. This is from a volcano that was declared to have ceased to be active about 10 months ago! Rightly Haffi said we were welcome to take a look ourselves, but of course it was at our own risk and should exercise caution. So, one by one, we each decided to take a look. 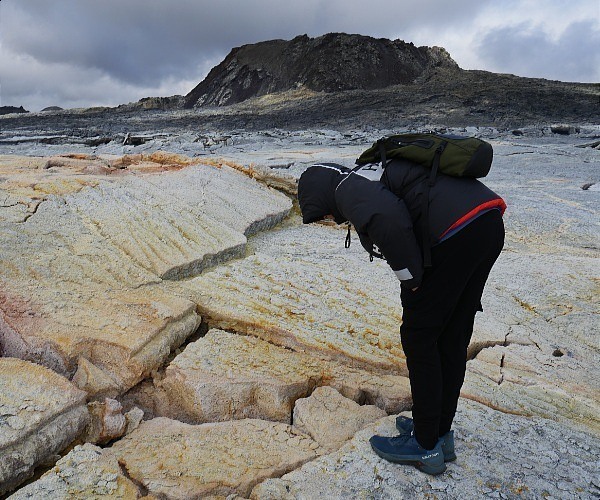 It wasn’t easy to see – and even harder to photograph – but of course there was lava underneath. Seeing lava was a first for all of us, so it was a particularly exciting moment, although we didn’t get the full spectacle of an active volcano, especially since it was totally unexpected. 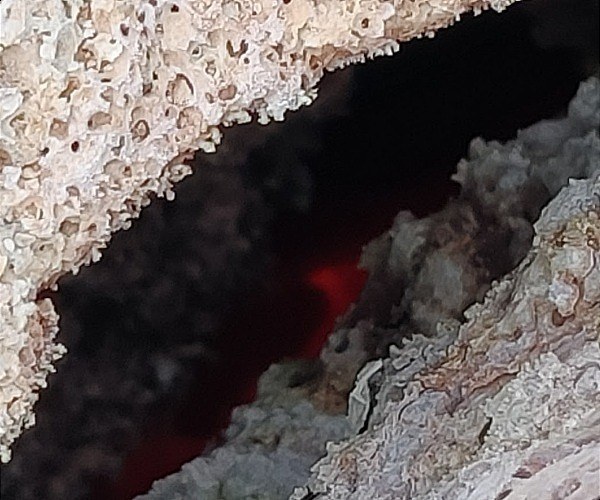 Haffi had come armed with a saucepan, water and eggs, which he planned to boil to demonstrate the heat coming from below, but unfortunately there wasn’t really a way to balance it out. reliably the pan on the hottest areas because of the uneven floor. abandoned this idea. If we hadn’t been able to see the lava with our own eyes, just pouring water over the cracks and seeing it quickly turn to steam was confirmation enough that there was still plenty of heat under our feet.

The weather had been kind to us, but the clouds were coming in a bit and now it was time to retrace our steps back to the parking lot. 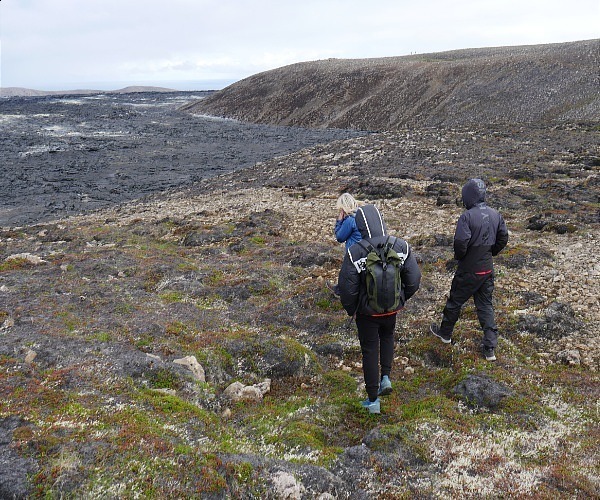 Now it was evening but still completely clear. And on the way back, we thought how lucky we were to have seen lava before in the land of “fire and ice”, although we had only been in Iceland for a few hours (although it was not there is no active volcano in the country at the time). 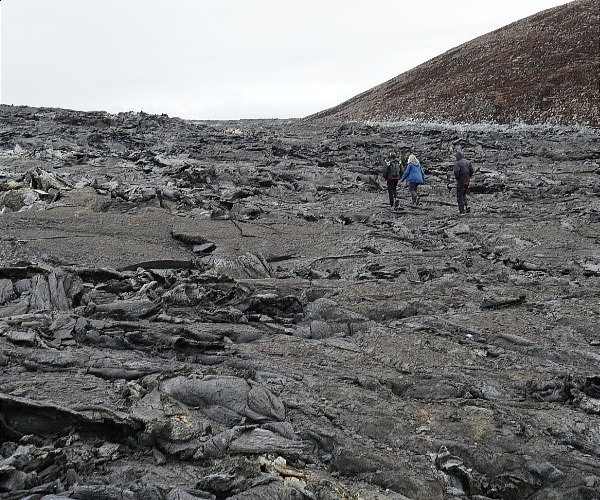 If you have the chance to take this trip, we highly recommend it! This is a fantastic family tour, with fabulous panoramic views. 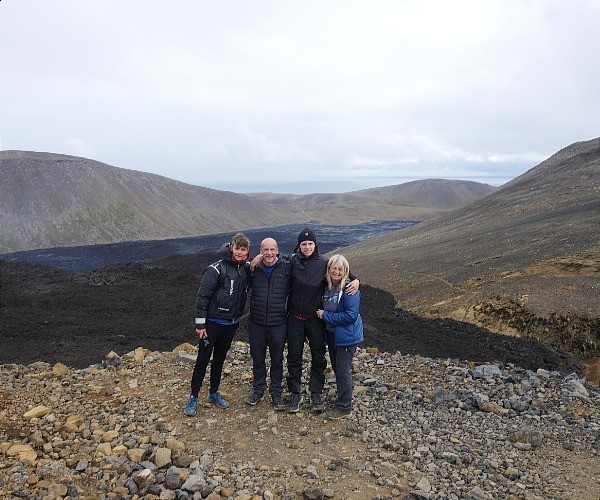 It should also be noted that although the eruption had ended by the time of our visit in July 2022 and recorded seismic activity had decreased, on August 3, 2022 the volcano erupted again when a 300 meters long opened in the Meradalir Valley area, just one kilometer from the site of the 2021 eruption that we visited and documented in this article. This eruption is currently still ongoing with tours also available with 2Go Iceland Travel. 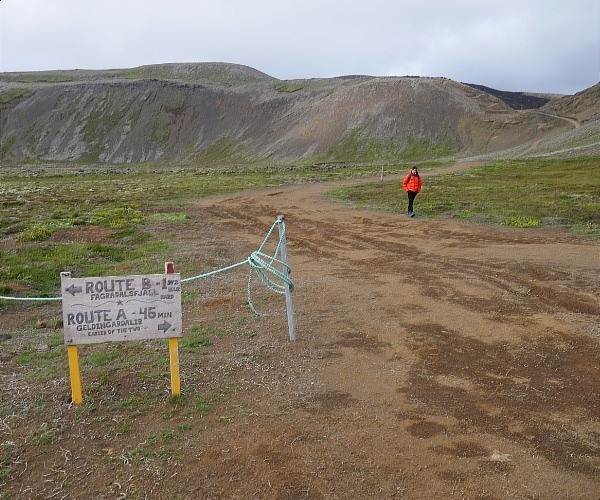 These volcanic events drew tourists from around the world, giving Iceland a more immediate post-COVID tourism recovery than many other countries. And while current tourists will no doubt be drawn to the site of the current eruption, the site of the first eruption is still worth a visit to view the stunning new lava fields that were left in its wake. And, if you’re really lucky like us… maybe you’ll see lava too!

For your convenience, the location of the volcano is marked on this Google map…

…and the exact route of our hike can be seen here:

But please visit with an experienced guide for the safest experience possible.

Are you planning a trip to Iceland yourself? You can watch a video of our trip to Iceland here. The first 25 seconds are from our visit to the Fagradalsfjall volcano site with Haffi and 2Go Iceland Travel.

Disclosure: This post is sponsored by 2Go Travel in Iceland. Our trip to Iceland was also sponsored by Helly Hansen.